As an event attendee of various industries for more than two decades and now an active organizer for large-scale productions, one trend noticeably runs through all events. Attendee Swag!!!  As Michael Scott once said on NBC’s hit show The Office, “Swag…stuff we all get”.

You know what swag is right? The shirt or mug or bag that is branded with the event and sponsor logos that all participants receive. In some instances, swag is nothing more than clutter or an item that will be discarded by event participants sooner rather than later. Other times, however, it can be a powerful and fun marketing tool.

In my experience, typically you know what to expect in advance prior to attending your favorite industry summit. You know the agenda, you know the speakers and often times, you know who is exhibiting at the trade show. However, the two questions that you may not know are “what’s for lunch?” and “what swag are we being bombarded with?”. We will save lunch and catering for another day, but let’s drill down a little bit on the topic of swag. 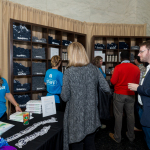 The Swag Shop was open from start to finish each day 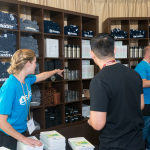 A full variety of branded items were available 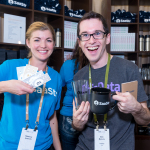 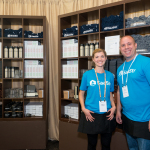 Generally speaking, swag is well received, but also normally, it’s one or two of the same items that everyone will get whether they like it or can use it. At SaaStr Annual 16, the creative geniuses at SaaStr moved to do something different and took a giant step outside the box. While teaming with Reinventing Events, SaaStr unveiled the “Swag Shop”, which was a creative approach to an often tired and overlooked event standard.

With more than a dozen items to choose from, event attendees were given $50 in swag bucks and thus given the opportunity to decide on what they were taking home. Attendees could choose from standard swag items such as T-shirts, pint glasses, coffee mugs and water canteens, or if they so desired, could choose more specialty items like leather tech kits, stuffed unicorn bouquets, and selfie sticks. All items featured the same SaaStr logo and still served a prominent marketing role.

Like most good ideas, the Swag Shop was designed to be more than a gimmick. The Swag Shop was strategically located in a position that required attendees to walk through the entirety of the exhibit hall. In addition to that, sponsors were given some extra swag bucks to use at their discretion as attendees visited them over the three-day event.  The shop was open the span of the three-day event and allowed the almost 4000 participants to visit as their schedule allowed. SaaStr did a great job of looking at the big picture and how everybody could benefit. At the end of the event and when the participants returned home, this writer has to believe that far less swag was discarded than most conferences usually see. 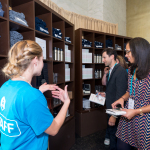 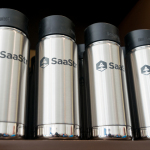 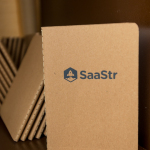 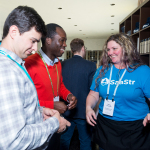 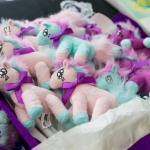 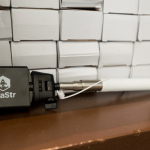 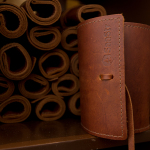 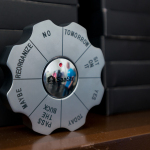 Take your SaaStr decision maker for a spin 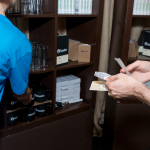 Items ranged in price from 5 to 50 Swag Bucks

Now before you say “that’s a great idea, but we aren’t big enough or that’s out of our budget,” try diving a little deeper. You probably already have a budget line item for swag, get creative with the quantities and be open to multiple options. Remember not everyone is excited about that shirt or coffee mug that they likely have already received multiples of at other events over the last 12 to 24 months.

Use this opportunity to stand out and give participants a choice. I guarantee this will be an element of your event that is remembered and shared with others through word of mouth.